Armen’s Thoughts Article: What Do You Want?

When our teenage daughter was playing Select Softball, we would sometimes travel to other cities for tournaments. Teams from all over the country would gather at a large sports complex and play softball over a whole weekend. We enjoyed meeting people from other places, listening to their accents, and comparing notes about our communities. But there was one theme that came up more than once: “You people from Seattle are too polite!”

This confused us. How can you be too polite? Politeness is good, isn’t it? How can you have too much of a good thing? To be fair, I can see that sometimes politeness can go a bit too far. I have personally seen people in Seattle put their car into reverse and back up to let someone merge onto the road in front of them. And what about waving people to go before you at a four-way stop? I mean, c’mon. There’s a rule for this – if it’s a tie, the person to your right goes first. Or is it your left? Anyway, it can cause a delay getting through the intersection, but it’s still nice to be nice, right?

The “you’re too polite” comment bothered me, because I thought they meant that we should be rude, because that’s the opposite of polite. Then a few years ago, we flew to New York to check out a college for that same daughter. We stayed right in midtown Manhattan.

The morning of the college tour, we went outside to get a cab to take us to Grand Central. “That’s funny,” we thought. There don’t seem to be any cabs. We walked down to 7th Avenue where it was busier. Weird, still no available cabs. Time was getting tight and we were stressed – we needed to get out to the college or we would miss our tour and admissions interview.

Later we discovered that there were no cabs to be found because a tornado had hit Brooklyn the night before. Many of the trains and subways were shut down because of the flooding.

But we didn’t know that yet. We just needed a cab. Soon.

So we walked back to the hotel and my wife Lori went up to the doorman on the street. He was sweating and seemed pretty preoccupied. She said “Excuse me, I’m hoping you can help us. We’re staying here at the hotel, and our daughter has an interview at a college north of Manhattan. We’ve flown all the way out here from Seattle, and we need to…” but then he interrupted her. He looked straight at her and said in a loud voice, “Lady! What do you want?”

Well, Lori can switch gears quickly. She looked right back at him and said, “A taxi.” He said, “Wait here.” He sprinted down to the next avenue, and for several minutes we could hear his whistle piercing through all the noise of midtown until he ran back, followed by a cab just for us. Afterward, when we learned about the tornado and the havoc it had caused in the city, we realized that he had performed a nearly impossible feat.

By asking a direct question, and getting a direct answer, the Manhattan doorman helped our morning (and his) go better. After that, we’ve noticed new things in New York. Like if you’re looking confused in the subway, very soon someone will ask you, “Where do you want to go?” If you stop on the street and open a map or a guidebook, within 30 seconds someone will stop and say, “What are you looking for?” The reputation of New Yorkers being rude is wrong. They’re not rude, they’re direct. It’s a big city, and there’s a lot going on, so they help each other out – quickly and without idle chatter.

This new understanding extends to my business. I try for respectful directness in my communication. If I need something from an employee, or a vendor, or a customer, I ask for it directly, and without a long story. And I ask them to be direct with me.

This approach requires an honesty that can be difficult. When you ask a question directly, sometimes the answer is “no.” This can be hard to accept. Sometimes we explore a topic in a long, roundabout way to avoiding risking the direct question and a disappointing answer.

Conversely, I know that most salespeople would rather be told a quick, direct “no” than to be strung along with false hope, wasting their time, just because I’m trying to be polite.

But the good thing about no means no is that yes means yes. When someone asks me for a favor and I say yes, sometimes they don’t believe me: “Are you sure? I know it’s asking a lot. You don’t have to do that.” Sometimes I tell them that I know I don’t have to do it – I’m doing it because I want to. If I didn’t want to do it, I would have said no. Believe me.

Are you direct? Have you found that it’s much easier than spinning out a long story and hoping that that other person will understand what you are really saying? If more of us took the direct approach, we could avoid misunderstandings and be a lot more efficient. 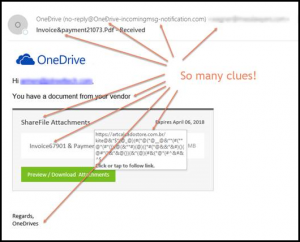 An example of a VERY BAD attempt at phishing! Notice all of the hyperlink URLs – NONE of the links [point to OneDrive. And they signed the email OneDriveS!!! 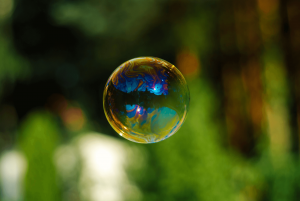 Knowing When to Let Go

Recently we started working with a new client, and of course we were excited about the opportunity!  But almost immediately the owner of the company started to aggressively question every step of our process…

The buzz of lawnmowers throughout the neighborhood means just one thing – Spring is here!  Time for new life and fresh starts.  Here are some